Tita Merello (1904-2002) was an Argentine tango dancer, singer, actress and vedette. She was one of the stars of Argentina’s Golden Age of Cinema.

Throughout her long career, which spanned six decades – from the 1930s to the mid-1980s – she appeared in over 30 movies and 20 plays, as well as three different radio series.

Merello lived a very long life; she died in her hometown Buenos Aires on Christmas Eve 2002 at age 98.

The house in Buenos Aires’ San Telmo neighbourhood were Merello was born has been designated a historical site.

Tita Merello’s autobiography “La calle y yo” was published in Spanish by Editorial Kier in 1972. 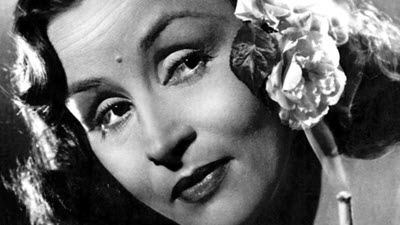 Tita Merello was the stage name for Laura Ana Merello, who was born in San Telmo, Buenos Aires on 11 October 1904. Her father Santiago Merello was a coachman and her mother Ana Gianelli, who was from Uruguay, ironed clothes. Laura Ana Merello eventually got a half-brother, Pascual Anselmi, who had a different father than her.

Santiago Merello died of tuberculosis before Larua Ana was even a year old. The family struggled with poverty, and when she was five years old she was sent to an orphan asylum so her mother could work.

Laura Ana was eventually moved to Montevideo, Uruguay, where she was forced to do maid work without being paid. At age 9, she was diagnosed with tuberculosis and sent to a farm in the Buenos Aires Province where she worked for room and board. Her duties included milking cows, cutting yerba and cooking food for the other workers.

She did not attend school and didn’t learn how to read and write.

Moving back to Buenos Aires

At 12 years of age, Laura Ana moved back to her mother in Buenos Aires, and took a job at a seedy night club called Ba Ta Clán. At some point around 1917, the young Laura Ana got a job as a showgirl at Teatro Avendia. When performing in her very first play, “Las virgenes de teres”, she was booed off the stage. After this humiliating experience she swore to never sing again. Fairly soon, she broke this promise as she was desperate for work and could earn som money singing in cafés along Avenida de Mayo. Here, her rendition of the tango “Titina” became very popular.

When she was 15 years old she med Eduardo Borrás, the editor of the newspaper La Nacion, and he thought her how to do some basic reading and also introduced her to a Simón Yrigoyen Iriondo who helped her become literate. Around the same time, she was working in the chorus line at Teatro Porteño.

When Laura Ana was 16 years old her mother died from tuberculosis. Now homeless, Laura Ana moved brief periods here and there, making rounds between friends and family members. She worked as a vedette under the name La Vedette Rea and became known for her expressiveness. Her singing voice wasn’t great, but the way she expressed herself was well suited for dramatic tango and the audience liked it.

In 1923, Laura Ana Merello was hired as a showgirl in the revue “Las Modernas Scherezadas” at the celebrated Teatro Maipo, and this would be the start of a much better worklife than what she had struggled with before. Now, she was performing alongside establishes stars such as Marcos Caplán and Pepe Arias. At Teatro Maipo, Merello showed off her talants singing the tango “Trago amargo”.

Las Modernas Scherezadas was fallowed by ¿Quién dijo miedo? And then Mujeres, flores y alegría. One of the tangos she sang was “Pedime lo que Querés”, a tune composed by Francisco Canaro and with lyrics by Juan Andrés Caruso.

In 1925, Merello premiered the tango “Leguisamo Solo”, written by Modesto Papavero as a tribute to the Urugayan jockey Irenaeus Leguisamo.

After her success with revues, Merello got a chance to try something different, as she was cast in the dramatic play “El Lazo”.

In 1927, Merello returned to her tango roots and performed “Un tropezón” at the Maipo theatre. She also recorded a lot; no less than 18 tangos in 1927-1929 – and all in her characteristic dramatic style.

Highlights from the 1930s

After her movie roles, Merello commenced a theatrical run in Montevideo, Uruguay where she played in Enrique Larreta’s play “Santa María del Buen Ayre”. This was to be one of Merello’s most highly acclaimed theatrical performance.

Highlights from the 1940s

Highlights from the 1950s

The 1950s was a busy decade for Merello. Among other things, she starred in “Arrabelera” (1950) which turned out to be one of her most highly acclaimed movie roles.

She earner two Premios Sur and three Silver Condor awards for her film work during the first half of the decade; two for Arrabalera, two for Los Isleros and one for Guacho. Los Isleros and Guacho were both directed by Lucas Demare, with whom Merello also did the Mercado de abasto movie.

1995 was a busy year for Merello, who did three films and also lived through a turbulent time in Argentine history as a military coup d’état ended the presidency of Juan Perón and sent many peronistas into exile.

After the coup d’état

Merello had not been a political actor, but her success during the Perón era still made her disliked by the new rulers, and an investigation commission accused her of having trafficked Ceylon tea. She fled to Mexico but was unable to find work there. Eventually, she returned to Argentina after being invited by fellow tango singer and actor Hugo del Carril. Merello was banned from working in mainstream theatre, so she worked for a while in an amusement park and then made shows with del Carril out of the eyes of the censors. She also recorded music with Francisco Canaro, and worked in a circus.

In 1957, Merello went back to Mexico to do a television production of Eugene O’Neill’s “Before Breakfast” (“Antes del desayuno” in Spanish). The following year, Arturo Frondizi was elected president in Argentina and Merello was allowed to work in Argentinian movies and mainstream theatres again. She returned right away and worked in two different stage productions during the same year: “Amorina” and “Luces de Buenos Aires”. In the latter one, she had one of the leading roles, together with del Carril and Mariano Mores. In 1959, she starred in “Miércolose de ceniza”.

Highlights from the 1960s

A film version of the play “Amorina”, directed by Hugo del Carril (1961)

Merello made around 40 recordings in the 1960s with Carlos Figari and Héctor Varela’s orchestra.

Highlights from the 1970s

Merello never married, but she was in a long-term relationship with the actor Luis Sandrini whom she first met while filming ¡Tango!. After being friends for a few years, they developed a romantic relationship in the late 1930s and Merello referred to him as the love of her life. They went to Mexico together in 1946, but she couldn’t accompany him to Europe when he left in 1948. When Sandrini returned to South America, he met the actress Malvina Pastorino in Uruguay and the two got married in 1952.