In the 1980s, a new style of tango began to develop and it became known as tango nuevo, which simply means new tango. The term tango nuevo is also used for music where new elements are incorporated into traditional tango music.

Today, tango nuevo dancer tend to include many improvised moves, including moves inspired by other dance forms such as swing and salsa. There is often a strong element of playfulness and allowing oneself to be inspired by the rhythm and melody of the music, rather than strict adherence to a certain set of movements. 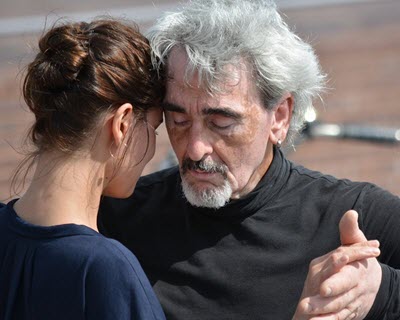 In the 1990s, the Tango Investigation Group (later known as the Cosmotango organization) in Buenos Aires began applying the principles of dance kinesiology to analyse the physics of movements in Argentine tango. This group, which was founded by Gustavo Naveira and Fabian Salas, took their newfound discoveries and used them to explore new possibilities of movement within the framework of Argentine tango. This is often regarded as the start of the Tango Nuevo movement. According to the founders of the Tango Investigation Group, tango nuevo shouldn’t be considered a tango style – only a method of analysis and teaching that developed based on applied kinesiology.

As early as the 1950s, there were skilled musicians in South America that dared to experiment with the traditional tango and break conventions by incorporating new instruments and musical styles into their tango music.

One notable example is the Argentinian tango composer Astor Piazzolla (1921-1992) who created nuevo tango music by including elements from classical music and jazz, and using instruments such as electric guitar and saxophone.

Now in the early 21st century, experimental tango composers often work with creating new effects by fusing acoustic sounds with electronic ones. This style is sometimes referred to as neotango. Examples of prominent neotango musicians are Rodrigo Favela, Pablo Ziegler and Carlos Libedinsky.