Contact improvisation (CI) is a type of improvised dancing that emerged in the United States in the early 1970s.

An important aspect of CI is the use of tough, weight-sharing and movement awareness to explore one’s body in relation to other participants. Balance, counterbalance, falling off balance, lifting/being lifted, and handling other people’s weight are common elements. Participants are encouraged to learn breathing techniques and deepen their understanding the mechanics of the body.

The creation of CI 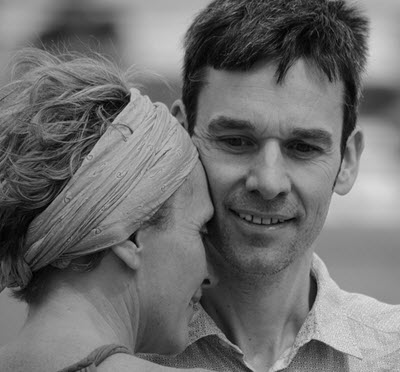 In early 1972, the dancer and choreographer Steve Paxton was in residence at Oberlin College on a tour with the Grand Union collective. For several weeks, he offered to different classes for the Oberlin students; one at dawn and one later in the day.

This class was a form of soft dance-meditation, with special attention paid to postural adjustments and micro weight transfers. Soon, Paxton began calling this the Small Dance.

Later in the day

This class explored the extreme of movement and disorientation. The dancers did everything from standing still to falling, rolling around on the ground, jumping into the air and colliding with each other. As an instructor, Paxton relied not just on his skills from modern dance but also from his experience with gymnastics and the martial art Aikido.

The two classes eventually gave rise to Magnesium, a 20 minute long performance piece where dancers jumped and collided, used gym mats, and clung to each other for 15 minutes, followed by 5 minutes to Small Dance.

With financial backing from Change Inc, Paxton could invite a selecion of dancers to work on Magnesium for a week in the spring of 1972. The group he put together included both old colleagues (such as Barbara Dilley, Nancy Topf and Mary Fulkerson) and former students of Paxton (such as Curt Siddall and Nancy Stark Smith from Oberlin College, Nita Little from Bennington College, and Danny Lepkoff and David Woodberry from the University of Rochester).

At the end of the week, the dancers presented a performance that Paxton named Contact improvisations. Contact improvisations was showcased in the form of an afternoon practise for five days in a row at the John Weber Gallery in Manhattan, with spectators coming and going during the practise.

A trend of the times

Well before Paxton’s group of dancers developed Contact improvisations, other dancers were experimenting with similar forms of dance. There are for instance plenty of examples from the 1960s of dancers exploring the limits and possibilities of human weight distribution and touch in the context of improvisational dance, such as Daniel Nagrin’s Workgroup and Annan Halprin’s San Francisco Dancer’s Workshop. Other names worth mentioning are Simone Forti, Trisha Brown, Julian Beck, Judith Malina, and Carolee Schneeman.