Carlos Gardel (Charles Romuald Gardès) was a French-Argentine singer, songwriter, composer and actor who became one of the brightest shining stars in the early history of tango.

Born in France in 1890, he moved to Argentina with his mother in 1893 and grew up in Buenos Aires. Regrettably, Gardel died young – only 44 years old – when the plane he was travelling on crashed in Medellin, Colombia.

Since 2003, it is possible to visit a museum dedicated to Carlos Gardel in Buenos Aires, located in a house that he purchased in 1927 and lived in with his mother to 1933.

There is also a Carlos Gardel Museum in Uruguay, in an old farm site called Valle Edén, roughly 23 km south of Tacuarembó. 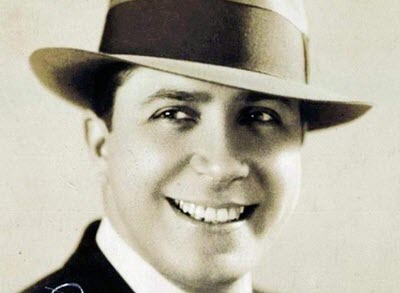 Gardel’s musical career lasted from the 1910s to his death in 1935. Even though his life and career was cut short, he recorded hundreds of songs, and he also wrote the music to several tangos that would go on to become classics – with lyrics provided by his long-time collaborator Afredo Le Pera.

Gardel was renowned throughout Latin America and Europe for his exquisite baritone voice and dramatic phrasing of lyrics. For many tango fans, his rendering of tangos became the benchmark against which all other tango performances were measured.

In his lifetime, Gardel earned several nicknames, including The King of Tango, El Mago (The Magician), El Morocho del Abasto (The brown-haired boy from Abasto), and El Zorzal (Zorzal is a Spanish name used for various songbirds in the genus Turdus).

Carlos Gardel started his career in music by performing in bars and at private parties. Sometimes he partnered up with Francisco Martino and José Razzano.

In 1917, Gardel’s rendition of Pascual Contursi and Samuel Castriota’s “Mi noche triste” sold 10,000 copies and became an international hit. Gardel went on tour in Latin America, and also made a few performances in Spain, France and the United States.

Gardel proved to not be a flash in the pan, and in the 1920’s his popularity grew larger and larger. He was now making so much money that his mother could stop working, and he could also afford to regularly send her back to France to visit her family in Toulouse. Gardel himself visited his uncle and grandmother for the first time in 1924 as he was touring Europe. His last visit to Toulouse took place the year before his death.

Gardel had made his film debut on the silver screen in 1917 with the silent movie Flor de Duracno, but was in the 1930s that he really got busy with film making, including making films for Paramount in France and the United States. The movies became an excellent way for Gardel to reach the public with both his movie star appearance and his amazing singing ability. Many of the movies were shorts, but he also participated in a few longer pieces.

Charles Romuald Gardès was born in Toulouse, France on 11 December 1890. His mother was a 25 year old unmarried laundress named Berthe Gardès. The father was a married man named Paul Laserre who had left Toulouse a few months earlier.

In 1893, Berthe Gardés and her son travelled to Argentina onboard the SS Don Pedro. They arrived in Buenos Aires on 11 March, and Gardés registered herself as a widow with the migration authorities to escape the stigma of her son being born out of wedlock.

The boy grew up speaking Spanish instead of French, and was called Carlos Gardel instead of Charles Gardés, while his mother was known as Berta instead of Berthe.

Gardel never married, but he was in a long relationship with Isabel del Valle, who he first met in Buenos Aires in 1920 when she was 14 years old.

Gardel feared that his popularity among his female fans would diminish if he didn’t seem to be an available bachelor, so he kept his relationship with del Valle a secret from the public. The couple’s families and closest friends knew of the relationship, but helped keep it under wraps. Gardel supported del Valle financially and arranged for her to have a house.

The relationship ended around 1930 and Gardel ordered his lawyer to stop the payments to del Valle. Del Valle eventually married nother man and moved to Uruguay.

Later in life, when del Valle could speak more openly about her relationship with Gardel, she remained very respectful about his memory. This includes a televised interview about him that she participated in as an old woman in the 1980s.

On 24 June, 1935, the airplane carrying Gardel crashed in Medellín, Colombia, killing Gardel as well as the pilot, a lyricist, two guitarists, and several business associates and friends of Gardel who were also onboard. Although sources are vague, a third guitarist is believed to have been found alive after the crash, only to die a few days later.

After his death, Gardel’s body was transported from Colombia to New York City and Rio de Janeiro, where hordes of fans gathered to pay their respects. Then, he was laid in state in Montevideo, the city where his mother was now living, and thousands of grieving fans showed up there. Gardel is buried in La Chacarita Cementary in Buenos Aires.

A few years after his death, a biopic was released where Gardel was played by Hugo del Carril.

Gardel created both tangos and other types of music. Below are a few examples of tangos for which he wrote the music and Alfredo Le Pera (who died together with Gardel in the plane crash) wrote the music.