Both American and International style have a closed dance position, but the American style allows the dancers to separate from closed position to carry out open moves, such as dancing apart from your partner, dancing side-by-side, alternate hand holds, and doing underarm turns. 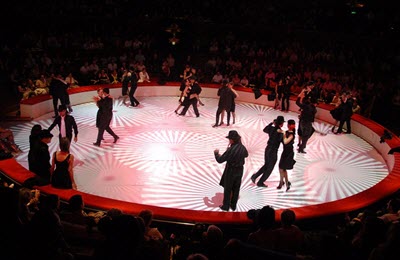 Tango was introduce to Britain in the 1910s. For many Britons, the musical comedy “The Sunshine Girl” which premiered in 1912 was their very first exposure to this exotic Latin American dance form.

As tango dancing grew popular in Britain, the dance also reached other parts of Europe, where it was influenced by existing dances, cultural aspects and individual dance teachers. In an effort to have a standardised tango danced throughout Great Britain, prominent British dance teachers agreed on a codified version of tango in 1922 for instruction in dance schools and for judging tango in contests. This codified version was referred to as English style tango.

Over time, English style tango came to dominate ballroom tango contests even outside Great Britain. Because of this, it is now known as international style ballroom tango.

American style ballroom tango was developed in the United States after a tango craze brought on by the movie “The Four Horsemen of the Apocalypse”. In this silent film, which premiered in 1921, legendary heart-throb Rudolph Valention danced a highly stylized form of Argentine tango.

The American style ballroom tango that developed in the wake of this movie was based on Argentine tango, but also contained Hollywood style steps and dance steps borrowed from several other social dances.

Inspired by how the British had codified their ballroom tango, influential dance teacher Arthur Murray (1895-1991) created an American style standard that he used for his chain of social dance schools in the United States.