Azucena Maizani (1902-1970) was an Argentine tango singer, songwriter, composer and actor from Buenos Aires. The 1920s and 1930s are considered the high-point of her career.

For many years, she dressed in men’s suits or in criollo cowboy attire for her performances, which gave her the nickname La Ñata Guacha, which roughly translates into “the pug-nosed cowgirl”. 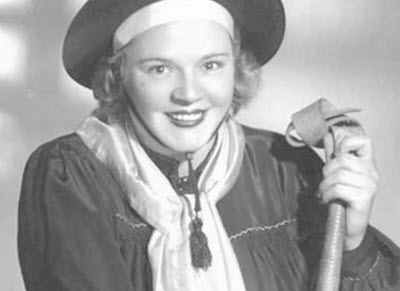 Azucena Maizani was born into a poor family in Buenos Aires on 17 November 1902. She lived in the Palermo neighbourhood until she was five, when she moved away from her family to live with relatives on Martín García island due to health reasons and her family’s lack of money.

On this island, which is located in Río de la Plata, near the border between Argentina and Uruguay, Maizani completed her grade school education. When she was 17 years old, she returned to Buenos Aires and found work as a seamstress.

One night in 1920, Maizani went to Pigall where the Uruguayan violinist and tango orchestra leader Francisco Canaro was performing, and she managed to convince him to let her sing two tangos in public with his orchestra. Canaro liked her performance and helped her launch her career. In 1922, she became a chorus girl in the brothers César and Pepe Ratti’s company.

At a family party, which she went to with the established singer Delia Rodríguez, the piano player Enrique Pedro Delfino was offering to accompany anyone who wanted to sing. Maizani took him up on the offer, and Delfino was so impressed by the performance that he introduced her to Pascual Carcavallo, a businessman in the theatre industry.

Carcavallo hired Maizani, and she made her National Theater debut on 27 July, 1923 with a comical sketch in which she sang the tango “Padre nuestro” which had been composed especially for her by Delfino and Alberto Vacarezza.

Theater, radio, recordings and a movie

Parallel with her stage work, Maizani was doing radio and recording records. She spent a summer with the Smart Theater, and in 1924 she worked on “Cristóbal Colón en la Facultad de Medicina” with Florencio Parravicini. 1924 was also the year when she becan to record with the Francisco Canaro orchestra.

During the rest of the 1920s, Maizani continued to work on various projects, from recording music to performing on stage. Her resume from the period includes stints with the San Martín Theater, the Hipodrome Theater, the Porteño Theater, the Maipo Theatre, and Radio Prieto. She premiered two tangos that went on to be very popular: “Silbando” and “Organito de la tarde”.

Towards the late 1920s, Maizani travelled to Uruguay to perform in Montevideo, and she also made her first film performance before the decade was over – in the silent film “La model de la calle Florida”, directed by Julio Irigoyen.

In 1931-1932, Maizani was on tour in Spain and Portugal as a part of the group Compañía Argentina de Arte Menor, which included the violinist Roberto Zerrillo with whom she had already been touring in Argentina. They also performed in Biarritz in southern France before heading back to South America.

Back in Buenos Aires, she acted in “Tango” which premiered in 1933. This was the first Argentinian full-length film with sound. Maizani’s rendition of “La canción de Buenos Aires” was played as the intro credits were displayed, and later in she had a scene were she sung “Milonga sentimental” dressed in a man’s suit.

In 1935, Maizani appeared in a cabaret within the movie “Monte criollo”, where she sang “Del mismo nombre”, a tango composed by Francisco Pracánico with lyrics by Homero Manzi.

In 1937, it was time for Maizani to go on tour again, this one visiting places such as New York City and various parts of Mexico.

Maizani died in her hometown Buenos Aires on 15 January 1970.